My Wrestling Story by Hannah Hubley 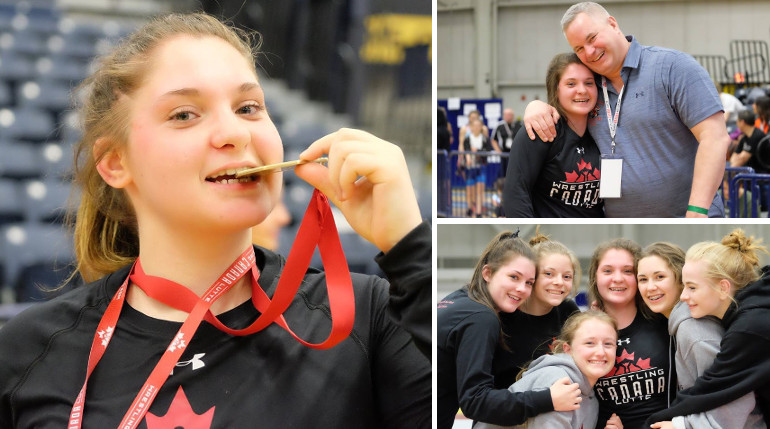 Wrestling is an amazing sport. It teaches people about discipline, friendship, and many other things. It teaches you lessons that you can apply to your everyday life. It also teaches youth to be accountable for their actions. Wrestling keeps people out of drugs and trouble. There is so many other things I could say about it, but I’m going to talk about my wrestling.

I’d like to say it was a hard decision but it wasn’t. It was the best decision I ever made because I got to do so many amazing things with the sport of wrestling.

When I was six years old, I joined judo. Judo teaches you almost the same thing as wrestling does. I became interested in judo because my sisters’ friends and some of my friends were in it and it seemed really fun. I was in judo for six years before I tried wrestling. In grade seven when I was 12 years old, is when I was able to join my school’s wrestling team at Duncan MacMillan High School. That is also the same year that we started a wrestling club, Sheet Harbour Wrestling Club. I wrestled and did judo for one year, but they were getting in the way of eachother and I had to make the decision and pick one. I’d like to say it was a hard decision but it wasn’t. It was the best decision I ever made because I got to do so many amazing things with the sport of wrestling. I was exposed to wrestling at a young age, when I was five, my sister started wrestling. I always went to her tournaments and her practices. I would sometime join in when they were doing drills all together. When I started seeing what wrestling was about and how much fun it was, I knew I wanted and had to do it when I was old enough, and that’s what I did.

I’ve gotten to see many things through wrestling. I got to go to New York City, and all over Canada.

What I like most about wrestling is how much it helps people in so many different ways. If you have problems in your life, you can go to wrestling practice and get any frustrations out by working hard. I’ve gotten to see many things through wrestling. I got to go to New York City, and all over Canada. I also like the challenge it gives. You don’t just get shown a move and then can do it perfectly, you have to work and work just to get it right, my coach, Mike Lidstone always says “Repetition breeds efficiency”. What that means is you drill to achieve muscle memory then continue in match type situation to become instinctive. Another saying is “Repetition is the mother of perfection” meaning the more you do things the better you will become. Sports experts say that you need to repeat things 10,000 times to get it perfect, but some can get it perfect before that. The challenge wrestling gives you is also one of the best things about it, but the best thing about wrestling is the friends you make, the people you meet, and the family you become.

The coaches Mike Lidstone, Rory Fraser, and Marley Repchull, have been amazing, not only are they amazing coaches but they are amazing people...

I’ve been wrestling in Sackville for almost four years. It is an amazing atmosphere, and with me being from Sheet Harbour, doesn’t make a difference because everyone is welcoming and nice and loves the sport. Practices are intense and it is all worth it. The coaches Mike Lidstone, Rory Fraser, and Marley Repchull, have been amazing, not only are they amazing coaches but they are amazing people, they love the sport even more than the athletes do which makes us love it even more. They put their hearts into making every day of wrestling count. They work us hard at practice, they give us wrestling homework, moves and techniques to practice, workouts to do at the gym and make sure we are strong and healthy and do everything to help us achieve all of our goals. They bring people from the Olympics, the best coaches in Canada, etc. to come and do camps with us to make us better. Not only do they help us with our wrestling, they help us with everyday things. They’re always there if we need someone to talk to and to help us with our problems in life that we are facing. Words can’t even describe how amazing my coaches are and everything they do for me and our wrestling family.

Left: Hannah on the national podium. Right: Hannah with Nova Scotians at the 2017 Canadian Nationals.

Two years ago I became a national champion. My coaches helped me and trained me to become the best I could be. I was supposed to wrestle in the 70kg weight class. I worked hard to get down to the weight class but at weigh-ins I was 70.8, I had an hour to lose the .8, but unfortunately I couldn’t make it so I had to wrestle in the 80kg weight class. The girls I was wrestling were 15-20lbs heavier than me, but with the training I was doing to prepare myself, it didn’t matter because I came out on top and won. My gold medal match was against a girl from British Columbia, she was bigger than me, taller than me, but it didn’t matter. At one point in my match she almost had me down but I could hear Mike yelling “scissor kick scissor kick scissor kick” and that’s what I did and it worked. I then kept listening and I could hear Mike “ go behind for your two, tilt tilt” after that the whistle blew for us to stand up, I then threw her down and got her in a pin and again I could hear Mike “ look up, sit back, hold her” and then the referee slapped the mat and the whistle blew. I won national champion. It felt even better winning, being the smallest one in the weight class. I could see the happiness on Mike and our teams faces, it was one of the best moments in wrestling except for my Canada Games experience. 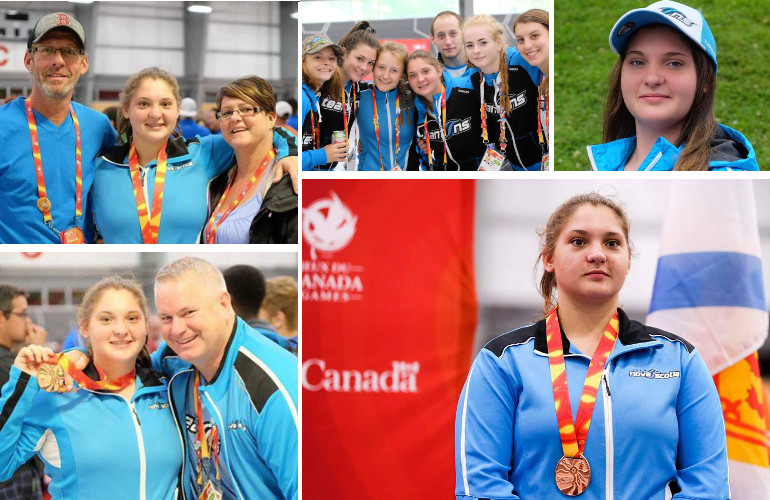 What can I say about Canada Games? It was an amazing experience and I’m so happy I got to do it. I got bronze at the 2017, Canada Games. It was one of the biggest Canada Games because it was the 50th Canada Games anniversary and Canada’s 150th anniversary. There was amazing athletes everyone, I made friends with not only people from Nova Scotia, but from all over Canada. Also I made friends with people from different sports. There were dances and karaoke, and many other exciting things. There were a couple different gyms so we could work out and keep our weight on track.

I made friends with not only people from Nova Scotia, but from all over Canada.

We had team meetings, where Mike and our other coaches would tell us what was going on, and give us pep-talks, we also went to watch other Nova Scotia teams, and a couple other provinces. We went to a couple Soccer games, and a few volleyball games, we were going to go watch the Nova Scotia girls softball but the buses got mixed up. We were put in rooms with other teams from Nova Scotia so that we could interact and learn about the other sports. In my room I had two other girls from my team and three girls who were golfers. It was very cool and interesting to hear about the sport and what kind of work goes into it. The best part about Canada Games was definitely the wrestling. The ages were 1999-2002. I was 15 years old when I went to Canada Games, I got to wrestle people from all over Canada, just like at nationals. The difference between the two, is you wrestle people older than you instead of the same age and you have to try out for Canada Games.

I had a big setback before Canada Games. At a wrestling camp the end of June I sprained my ankle. I wasn’t able to practice for almost a month, so I wasn’t getting the training that I should’ve had. I still went to practice and watched, I went to physio and did everything I could to get better as fast as I could so that I could get back to training. After I got back to training it was only 4-5 weeks until we went to Canada Games. I trained hard, and 5-6 days a week I would drive into Sackville which is about 1hr 45min from my house in Sheet Harbour. When I got to Canada Games and was ready to wrestle, my coach Rory was not able to come to Canada Games, but he watched us and kept in touch to see what was going on and how everyone and everything was going.

In the team matches I went 3-1, I qualified for semi-finals. My match was against an amazing wrestler from Ontario. I lost in the semi-finals, but I wasn’t completely torn up about it because I still had a chance for a bronze medal. Mike gave me a pep-talk, Rory called me and gave me a pep-talk and Mike sat up an appointment for me to go talk to our sports therapist, to get rid of my nerves and to help me relax. My bronze medal match was against a girl from New Brunswick. We’ve wrestled before, she has beaten me and I’ve beaten her, so I was a little nervous to see how the match would go. Before the match I visualized, and got in the right mindset. I ended up winning my match 10-0 in the first round. It was a very exciting moment to become a medalist at the Canada Games. I couldn’t thank all of my coaches enough for the help and the drive they gave me to do my best.

... my goal this year is to medal at Nationals [...] and become a national champ for the second time.

Last year was another setback, while in gym class at school I broke the tendons in my finger and the bone moved. That was a huge setback because I wasn’t allowed to wrestle for a very long time. I didn’t listen to everything the doctor said although I should of. I wasn’t supposed to do anything except for cardio and things like that but I still went to practice to drill lightly and to do the cardio exercises. I also went to the gym and pushed things – maybe too much but I did these things because nationals was coming up and I had to be ready. After I was able to wrestle again I still had to be very careful. I missed out on all the tournaments, except for one, so I wasn’t super prepared for nationals. I also had an injured arm. I lost in my bronze medal match and got fourth. So my goal this year is to medal at Nationals this year and work to get gold and become a national champ for the second time.

That is my wrestling story, again I want to say thank you to all of my coaches and everyone in my life that help me achieve my goals and push me to be the best I can be.